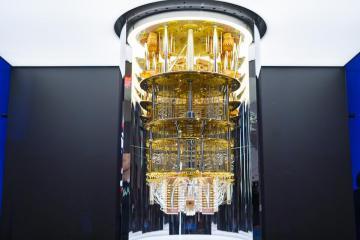 A team of researchers from the Quantum Computing Institute at Oak Ridge National Laboratory (ORNL) and University of Tennessee investigated the stability of near-term intermediate scale quantum (NISQ) devices. The researchers characterized the reliability of these experimental computing devices by quantifying the essential criteria for a quantum computer to operate. They then studied the stability of state-of-the-art quantum computers to achieve those key metrics. The basis for their assessment was distribution similarity of the key metrics, evaluated in both time and space. For identical experiments, devices that produce reproducible histograms in time, and similar histograms in space, are considered more reliable. The researchers investigated the device reliability concerns of quantum computing community using data collected from IBM's Yorktown device. The paper won the IEEE Best Paper Award in the Quantum Benchmarking and Measurements tracks at the IEEE Quantum Computing Conference in October 2020.

Current quantum computer are facing a reproducibility crisis. A plethora of work in the field is published that is not replicable, and this raises serious questions on the long-term value of some quantum computing research tenets. The current work support quantifying the extent of reliability in quantum computers and guides industry and government agencies toward developing roadmaps that support more reliable NISQ devices and reproducible results.