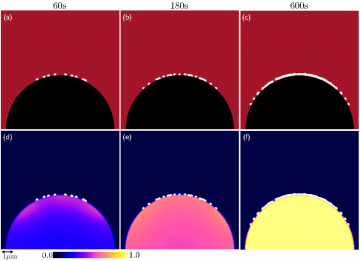 The onset of lithium nucleation and subsequent plating on the anode is a challenging problem in the design of fast charging batteries. A variational phase field formulation has been developed to initiate the nucleation of lithium particles based on the local plating overpotential conditions and allowing to predict the lithium plating under fast charge conditions. The model demonstrates that (1) at small charging current density, there is no nucleation and plating of metallic lithium, and no effect on the intercalation kinetics; (2) at intermediate charging current densities, initially a stagnated growth from isolated lithium nuclei is observed followed by a continuous growth of metallic lithium; (3) at large charging current densities, a continuous growth of metallic lithium resulting from coalescence of small nuclei into large nuclei decreases the excess interfacial energy, which in turn slow down the intercalation kinetics. The formulation sets the stage for predicting and evaluating the influence of various electrolyte compositions, electrode particle morphologies and electrode loadings on the nucleation and plating dynamics under fast charge conditions.

DOE’s eXtreme Fast Charge and Cell Evaluation of Lithium-Ion Batteries (XCEL) program seeks to understand and develop technologies to charge a 250-Wh/kg Li-ion battery by 80% in 10-15 minutes while meeting a 1000-cycle, 15-year lifetime. One of the major challenges for fast charge is Li plating side reaction that occurs due to high electrode/electrolyte overpotential especially under electrolyte depletion. Further challenges include predicting Li plating location and rate include effects of electrode surface roughness, compositional inhomogeneity of the solid electrolyte interphase (SEI), charging rate, and electrolyte composition.

The developed framework is a good starting point to accurately predict the amount of plated lithium in the complex graphite anode microstructures including the effects such as surface tension, particle morphologies and sizes, porosity, tortuosity, etc., and allowing to design the optimized physical electrolyte properties and operating conditions.

A computational framework to predict the onset of nucleation and lithium plating on heterogeneous charged surfaces under fast charge conditions is developed. A thermodynamically consistent variational theory is proposed to comprehensively consider the lithium plating at the electrolyte and electrode interface in addition to the intercalation of the lithium into the anode particles. The formulation provides a rational basis to understand the nucleation and growth kinetics of lithium deposits, along with the effect of lithium plating on the lithium intercalation kinetics in graphite under fast charge conditions.

A continuum thermodynamic formulation encapsulating the lithium plating and lithium intercalation reactions at graphite/electrolyte interface has been developed to understand the lithium plating kinetics under fast charge conditions. The nucleation of lithium deposits on the graphite anode is a result of local plating overpotential, which is dependent on external applied charging current density for a fixed initial electrolyte and graphite chemistry. The formulation presented herein allows to incorporate other interfacial electrochemical reactions such as Lithium metal/graphite re-intercalation, and electrolyte/lithium metal for dendrite growth during over charging conditions. Also, the model has a capability to understand the effect of transport properties of graphite and electrolyte and the interfacial properties such as surface energies on lithium nucleation dynamics.