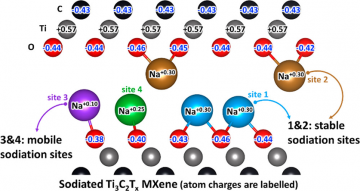 Atomic charges computed with the density-functional tight-binding (DFTB) method were computed for sodium-ion capacitors consisting of sodium atoms intercalated between layers of oxygen-terminated Ti3C2O2 MXene slabs. Mobile sodiation sites, as evaluated from DFTB-based molecular dynamics (MD) simulations, generally have lower positive charges than sodiation sites that are long-term stable. The latter also feature divalent Na-O interactions. Classical MD simulations were not capable to provide this crucial insight since the charges in such simulations are fixed.
2021: Q2

Researchers at ORNL and Tulane University have developed a layered titanium carbide (Ti3C2Tx) MXene as a promising electrode material for use in next-generation electrochemical capacitors.

This work demonstrates that presodiation dramatically increased the sodium capacity by more than 2-fold. This shows the feasibility of chemical preintercalation as an approach to prepare MXene electrodes for nonaqueous ion capacitors.  Electronic structure-based molecular dynamics (MD) simulations were crucial to confirm structural agreement between the computed structure and dynamics on the one hand, and neutron-generated pair structural information on the other hand.

New capabilities are the accurate prediction of:

Density-functional tight-binding (DFTB) calculations were crucial to understand the charge state of the intercalated ions during dynamic processes.

Layered titanium carbide (Ti3C2Tx) MXene is a promising electrode material for use in next-generation electrochemical capacitors. However, the atomic-level information needed to correlate the distribution of intercalated cations with surface redox reactions, has not been investigated in detail. Herein we report on sodium preintercalated MXene with high sodium content (up to 2Na per Ti3C2Tx formula) using a solution of Na-biphenyl radical anion complex (E0 ≈ −2.6 SHE). Multiple sodiation sites and formation of a two-dimensional sodium domain structure at interfaces/surfaces is identified through combined computational simulations with neutron pair distribution function analysis. The induced layer charges and the redox process characterized by the density-functional tight-binding method on a local scale are found to greatly depend on the location of sodium ions. Electrochemical testing of the pre-sodiated MXene as an electrode material in a sodium-ion capacitor shows excellent reversibility and promising performance, indicating the feasibility of chemical preintercalation as an approach to prepare MXene electrodes for ion capacitors.